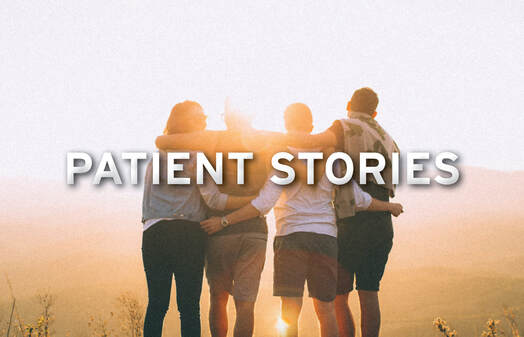 "If I were to lose my sight, what would I remember?" These are the words designer and stylist Carole Garber Friedman asked herself as she laid on an MRI table in 2018. But long before Carole learned she had eye cancer, she was a bustling figure in the fashion world, having worked in haute couture and designed handbags for Henri Bendel. Above all else, Carole had lived her whole life with perfect vision, seeing the world through her creative eye with flying colors. This changed when a bee stung her eye, sending her to an eye care specialist who diagnosed glaucoma.

Upon a routine visit in 2016, Carole's eye doctor noticed something different in her right eye. She had a "beauty spot" that would be monitored every four months by a retina specialist. The news was received almost comically amongst Carole and her social circle — "this would happen to Carole," she recounted while laughing.

Two years later, Carole found herself in her element about to do a trunk show amidst New York Fashion Week. It was there, however, that she took a devastating fall that would leave her with numerous fractures. While completely bedridden, Carole remembered her retina appointment was approaching. Despite her unwavering desire to reschedule, Carole's husband wheeled her to the appointment, and much to her dismay, the "beauty spot" had changed.

Carole's retina specialist wasted no time and sent her to The New York Eye Cancer Center the following day. However, Carole did not know, and did not want to know, that's where she was headed. As she and her husband approached the doctor's office, she made the conscious decision to look away from the title posted on the door. Carole was in excruciating physical pain from her fall and was hesitant to learn how this new development would contribute. After a complete ophthalmic examination, she found herself in a conference room alongside her husband and across from the doctor. He proceeded to say, "Carole, you have eye cancer; a malignant choroidal melanoma."

And so, Carole's eye cancer journey began. The next day, she was to have a total body scan to ensure there was no cancer elsewhere in the body. In this moment, her diagnosis stared her down:

"I laid in the scanner, uncomfortable due to my injuries and unable to move. I started to memorize all of these incredible things — colors, butterflies, everything in the world. I thought of my mother, my father, the kids, my husband and how he sees the world through design, just everyone. It forced me to see how beautiful life is and how great memory is."

Within a week of meeting her eye cancer specialist, Carole had her first eye cancer surgery. He used plaque therapy, meaning she had one surgery to insert the radiation and a second a week later to remove the radioactive plaque. While it was an adjustment waiting for the swelling to go down after the surgery, with her upper eyelid still falling a little lower than the other, Carole is grateful for the life and vision saving treatment she received.

"The truth of the matter is, I look at my eye every day and think of [the doctor] because no one would really notice that it's different. I look at that and say 'lucky lady... lucky, lucky lady.'"

For the past three years, Carole has been able to maintain her vision. She has now chosen to direct her creative energy to the worthwhile cause of The Eye Cancer Foundation. When it was time to leave the hospital following her second surgery, she witnessed a child who had to lose their eye to cancer.

"Seeing the child with a black eye patch, I said, 'I don't ever want children to have black eye patches and we're going to do something. This was meant to happen to me, I've got to be the voice.'"

With that image firmly ingrained in Carole's memory and after embarking on her own eye cancer journey, she plans to unveil a project to help raise money for The Eye Cancer Foundation and its worldwide outreach. She is eager to help the cause so that, in her words, "we can have doctors in every corner of the world to do this marvelous, life-saving surgery."

Personal Note from Carole: "I shall be grateful to Dr. Paul Finger every day of my life."

I checked The Eye Cancer Network Message Board every day! The countdown to my next appointment in 8 weeks started and I began researching CM. I wanted to read everything there was on it, but then I had to stop. Too much information, too fast, so I stopped reading, but I checked the Eye Cancer Network message board everyday and posted a message occasionally. What was most helpful was talking with two patient advocates from The Eye Cancer Foundation and knowing that I could call or email my doctor at any time. Relief arrived after the eight weeks were over and pre-op testing and the surgery was set. I felt so much more relaxed at that point and was looking forward to having the surgery and moving on with my life. I did not like waiting. For some reason, pre-op testing was easy for me, even the PET/CT scan. Both surgeries went well, and my biggest concern, anesthesia, was not really an issue. I was actually eating tempura, right out of recovery. Being somewhat isolated from others for seven days, wasn’t as difficult as it sounds, however staying away from my dogs proved more challenging. I was never in any pain, just discomfort, which is exactly what everyone had told me. Once the stitches began to dissolve, my eye became somewhat itchy, but not unbearable. The muscles around my eye had been cut, so they felt a bit tight. I was feeling good and wanted to return to work ASAP, I was bored. My eye was red, but there was no obvious swelling and no bruising.

​​Having support was the biggest key. Since the surgeries, the sight in my left eye has diminished greatly. I can still see light, shadows and movement, but no detail. That’s OK, I still have my eye, many people don’t. Having support was the biggest key to getting through these last five months. The support I received from the patient advocates, the staff in my doctor’s office and my doctor himself was immeasurable. The compassion, kindness and caring demonstrated by everyone is unheard of in healthcare these days. I feel very fortunate to have been treated by such a special group of individuals. Thank you.