Dr. Ahmad Shokri Zewar from Yemen was the first author of a recent study to evaluate the features and outcomes relating to the management of uveal melanoma in King Hussein Cancer Center in Jordan. Zewar conducted the study with Dr. Yacoub A.Yousef, a collaboration that was possible thanks to The Eye Cancer Foundation’s Fellowship program that supports training of eye cancer specialists from unserved countries.
​
​ 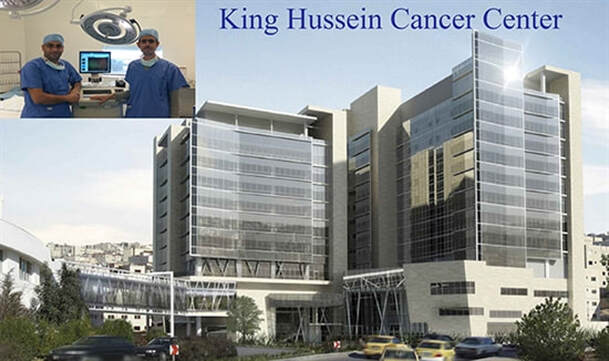 While the paper focused specifically on King Hussein Cancer Center, the aim was to complete a study that could be generalized to other referral tertiary cancer centers in the Middle East.
The study focused on 46 patients with uveal melanoma between 2006 and 2014. There were actually 76 patients diagnosed in the hospital over that time period, but 30 were excluded from the study due to lack of data or because they didn't receive follow-up. This is a relatively low number, and researchers concluded it provides the impression that uveal melanoma occurs with a low frequency in the Middle East as compared to Western countries.

Eighteen eyes (39% of the patients) were treated by primary enucleation, and 28 eyes (61%) were treated by I-125 radioactive plaque therapy. Two of the eyes treated by plaque therapy were subsequently enucleated. Many of the patients were not diagnosed until the disease had significantly advanced.
The authors write: “In our review, a significant percentage (65%) of affected eyes had a visual acuity of less than 0.1, which is worse than the visual acuity for of patients studied in the COMS study where only 33% had visual acuity of less than 0.1 (9). This finding might be explained by the delay in presentation after the onset of ocular complaints in developing poor countries where health care could be unachievable because of the high cost or of far distance to travel.”

Late diagnoses lead to a higher number of enucleations and more metastatic melanoma: “A significant number of Arabic patients, unfortunately, present to ocular oncology clinics at a time where the tumor reaches a large size or is associated with complications that make it non-amenable for brachytherapy and end up with enucleation. Therefore, awareness must be increased and early detection improved with prompt referral by the general ophthalmologist to save more eyes and to enhance survival of affected patients.”

The paper could serve as a springboard for more aggressive efforts to raise awareness of uveal melanoma and its symptoms. This could lead to early diagnoses and a higher cure rate without the loss of an eye.

The goal of the ECF Fellowship Program is to help train candidates from underserved countries so they can return and establish programs for the local populace. The fellowship provides training, a stipend, and travel expenses. In return, doctors agree to return to their home country and treat eye cancer patients.
Drs. Ahmad Shokri Zewar and Yacoub A.Yousef’s work demonstrates the value of investing in doctors in underserved areas and attest to the success of the Eye Cancer Foundation fellowships.